Discord is introducing a native way for servers to preemptively detect and block harmful messages and spam. The tool, called AutoMod, is available today and will allow anyone who moderates one of Discord’s server-based communities to create a custom list of words that the new bot can scan for and intercept.
When one of the target words is detected, the bot can automatically block that message so it never hits the server, send an alert to a specific channel to give moderators a head’s up or put a user in “timeout” by temporarily turning off their ability to send messages. Discord will also provide a pre-built list of words and phrases that are commonly flagged by mods that can easily be toggled on without building a custom keyword list.
“I think one of the big pain points that we’ve heard from a lot of moderators is that they spend a lot of time policing their servers, as opposed to actually doing the things that they want to do, like running events [and] creating culture,” Discord Group Product Marketing Manager Jesse Wofford told TechCrunch.
Unlike existing tools, Discord’s AutoMod can preemptively scan conversations, identifying anything with the targeted keywords before it ever appears in chat. External tools previously didn’t have the permissions required to see messages before they hit a server and instead would automatically moderate them a few seconds afterward. Discord says that it will give its developer community the ability to build onto AutoMod’s preemptive detection ability now that the new native tool is in the wild. 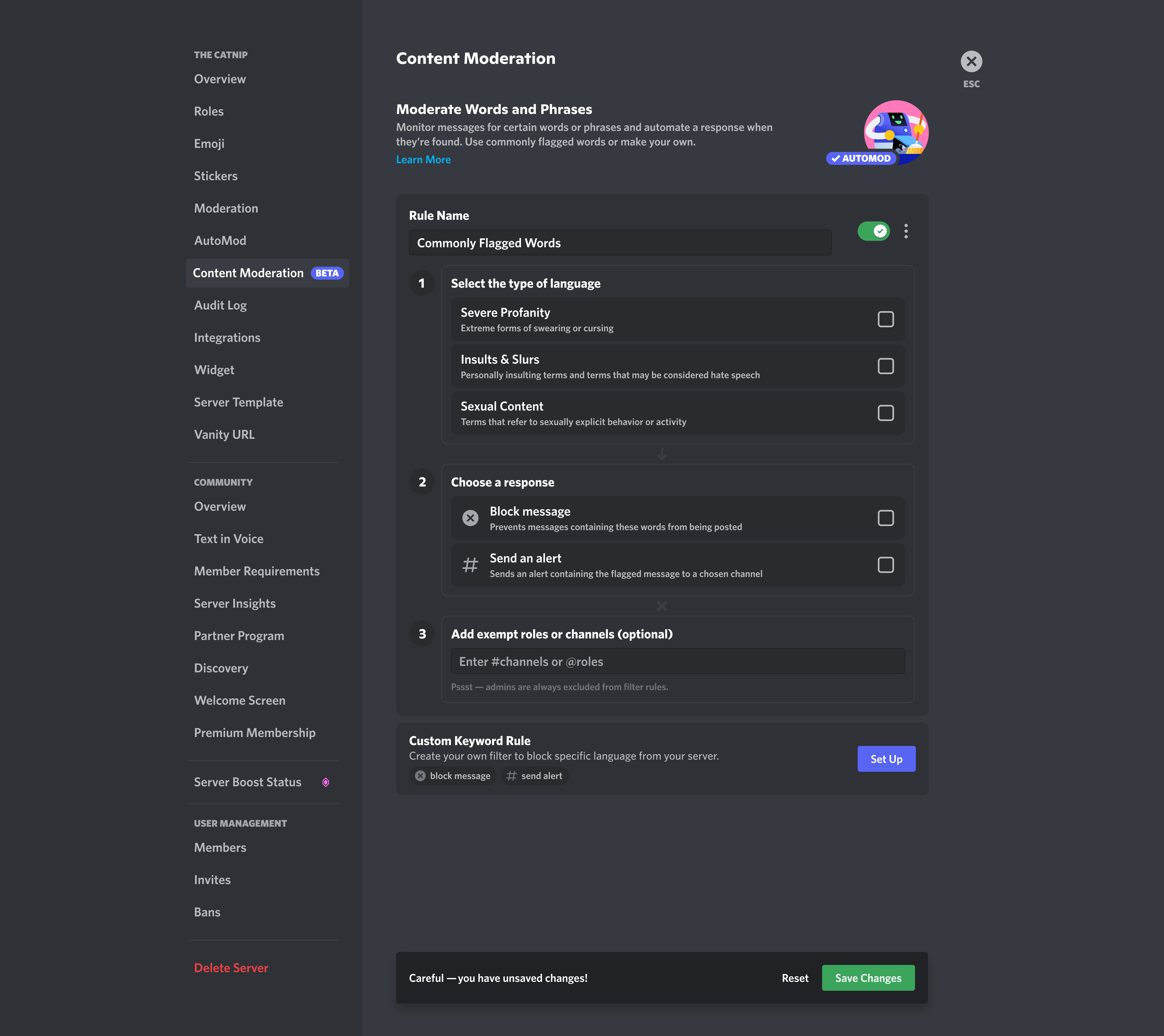 Image Credits: Discord
“There are a lot of moderation bots on Discord and I think they’ve actually been doing a lot of the heavy lifting for now,” Wofford said. “We’ve taken a lot of inspiration from them in terms of what’s working for them and actually chatting directly with developers and chatting to our admins about what they like.”
Discord is increasingly building some of the features its users previously incorporated through external services into its core app. Users have long relied on the app’s external ecosystem of plug-in tools to do everything from welcoming new server members and scanning for harassment to DJing music within channels and playing mini games.
Wofford says that Discord wants developers to “come along for the ride” and remain relevant even as the company integrates features that external bots previously provided to its community.
Beyond introducing AutoMod, Discord also announced that it will expand premium memberships, a Patreon-like way for active community members to pay for perks and additional server access.
This summer, Discord will begin allowing more servers to enable premium memberships, but the company isn’t yet opening the feature to anyone. Discord will allow servers in the U.S. with over 500 members to apply for the program, but will still hand review those communities to ensure that the rollout is smoothly and the company learns along the way.
“We want to make sure that we’re being very thoughtful about people coming in,” Wofford said. “We think that we’re creating a really new paradigm for career monetization, when it comes to the idea of community being something of value you can monetize. And I think we’re playing the long game here.”
Discord first announced a pilot program for premium memberships back in December. The company started by giving a small cluster of communities access to the feature set, which allows servers to make a portion of or all of their content available to paid members only. The early servers that tested premium memberships included a game tutorial community, The Trans Community Center and Stream Professor, which offers guides for people getting into livestreaming.
The idea is to both make the work of maintaining a Discord community more “sustainable” and to bring outside payments users make for premium content on Patreon or elsewhere into Discord itself. Server admins can set their own pricing depending on what works for their community and what they plan to provide.
Through early feedback with its pilot program, Discord is also adding new features for premium memberships, including a new analytics dashboard, custom server emojis and the ability to offer free premium trial memberships so prospective members can try before they buy.
Discord is also introducing two new resources for mods and admins that manage communities: a community resource center stocked with educational information to help servers get up and running and a special hub where community admins can interact with Discord’s staff, get news and join events.
Discord is working on premium memberships, a new monetization option for creators

The Future of NFTs: Is FOMO the Best Business Model? – Toolbox