OnlyFans — the platform where adult creators can directly monetize their audience — is pushing its safe-for-work app OFTV, which is available on iOS and Google Play. The ad-free app launched in January, sharing over 800 videos from OnlyFans creators, like cooking tutorials, yoga routines and interviews. But this week will be the first time that OnlyFans will market the app to reach people who aren’t existing OnlyFans customers.
“There’s no adult content on OFTV. Because it’s not being monetized and there’s no direct impact on creators’ earnings, we are able to be in the app store,” OnlyFans CEO Tim Stokely told Bloomberg. The App Store and Google Play both prohibit pornography, but in the case of apps with user-generated content (like Reddit), NSFW content can slide as long as it’s labeled as such and hidden by default. OnlyFans, as it exists on the web, hasn’t been approved on Apple’s App Store or Google Play. 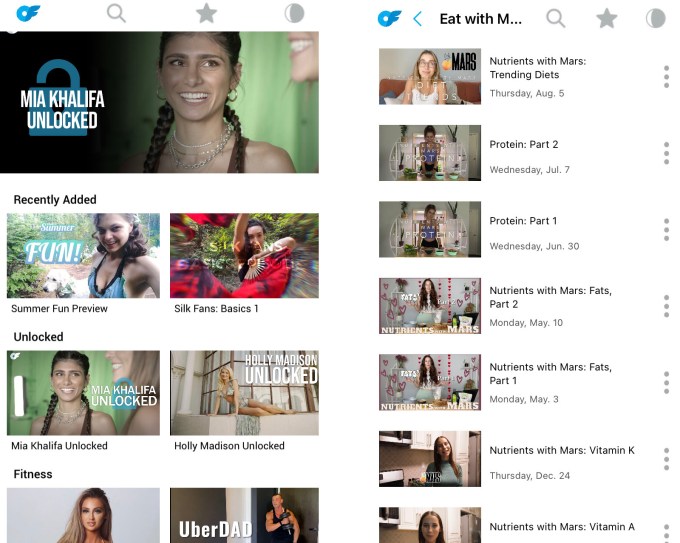 Image Credits: OFTV (screenshots by TechCrunch)
OnlyFans is profitable, but to continue to grow, it is seeking funding at a valuation of over $1 billion. Per Bloomberg, OnlyFans wants to become a more mainstream platform in order to solicit advertisers that may be worried about its adult reputation. Even celebrities like Cardi B and athlete Floyd Mayweather Jr. have joined OnlyFans. In March 2020, the app also launched a Creative Fund, which rewarded four musical artists with a £20,000 grant. Plus, the “rising stars” the app features on its blog include songwriters, photographers, stylists, personal trainers and chefs. Its effort to highlight SFW creators is clear, and the promotion of OFTV supports that.
The platform has paid out more than $3 billion in creator earnings since its founding in 2016 — in particular, revenue grew over 553% in 2020, when many people turned to OnlyFans for an income stream in a time of pandemic-induced financial strain. OnlyFans takes 20% from creators’ earnings; comparatively, Patreon charges between 5-12%, while Cameo takes 25%. Even if OnlyFans were accepted to app stores — NSFW content and all — it may not even be good for creators, who would then lose an extra 30% to app store fees on top of the platform’s 20% cut. But OFTV doesn’t sell content or allow unsolicited users to upload videos, so its apparent purpose is to generate more excitement around non-pornographic OnlyFans content.
To appeal to SFW creators, OnlyFans might have to shed its image (for those concerned with that), but perhaps more importantly, the platform would need to show that it is a particularly profitable space for creators. Its sales speak volumes, but that could have more to do with the booming creator economy and the nature of the content it hosts, rather than the platform itself.
The NFT craze will be a boon for lawyers

The Nintendo Switch is in the middle of its life cycle, but it's starting to show its age – iMore

The Nintendo Switch is in the middle of its life cycle, but it's starting to show its age – iMore